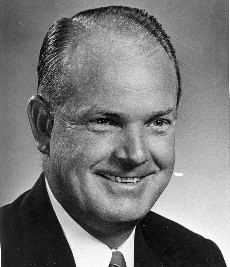 Flanders “Snag” Thompson’s law enforcement career began as a motorcycle policeman with the Florida Highway Patrol in 1939. He took a leave of absence in World War II to fight in North Africa, Sicily and Italy and returned to the Highway Patrol later as a sergeant. At the urging of News-Press Editor Carl Hanton, State Sen. Jim Franklin and others, Thompson won his first of six terms as Sheriff.

Retired Lt. Col. Jerry Warriner recalls when he was hired in 1955, deputies had to buy everything needed for work but their weapons. That included a patrol vehicle, although the agency would pay for expenses. At the time pay was $150 a month with an additional $100 a month for a car allowance. Deputies made their own shifts to cover their territory, but it was understood that everyone worked Friday nights, when fighting and public drunkenness often would occur and help was needed the most. They also would average one day off a week. Radios were available, but they didn’t work very well.

Looking back on his long tenure, Warriner said finding lost children rank among his most memorable experiences. “It’s not like catching a bank robber, but it had a lot of feeling to know you found some kid who was lost and reuniting them with their parents,” he said in a 2008 agency interview.

There were many discussions surrounding the construction of a new jail between 1922 and 1953. Renovations were completed to the jail in 1923, and in 1926 another section of cells were added. Construction plans were discussed and bids were taken, but no new jail was constructed until 1953, likely after the prompting of Florida Jail Inspector Jessie Creech in 1950, who strongly encouraged Lee County Commissioners to construct a new jail as soon as possible or he would be compelled to condemn the jail and the prisoners would be moved to other county facilities. Sheriff Thompson held an open house in September 1953 to allow the community to examine the new $390,000 jail, which could hold 120 inmates.

Lee County’s population soared during this period. After reaching 23,404 residents in 1950, the population hit 54,539 in 1960 and 105,216 in 1970. This can be attributed to the Rosen brothers’ development of the area known as Cape Coral in the mid-1950s, when advertising in northern states began on a large scale. Planeloads of tourists were flown into the Cape to view it as prospective purchasers. Lehigh Acres was born in 1954 from what previously was an 18,000-acre ranch. Developers stamped out 150,000 building lots in the latest versions of the great Florida land boom. In the first year alone, 12,000 lots sold. The opening of the Sanibel Causeway in 1963 spurred barrier island development, while the completion of the Cape Coral Bridge in 1964 greatly facilitated traffic between the southern end of the Cape and the southern end of Fort Myers.

Through this growth, the agency remained small and pay was a pittance. The Lee County Sheriff’s Department had a 68-man force in 1970, with a starting salary of $7,020. With a service population of 85,000 residents, the National Safety Council at the time recommended a police force of 162.

Deputies continued to uphold the tradition of visiting the home of any person who died in the county – black or white – to express the Sheriff’s condolences, according to Bob Macomber, who started in 1976 and retired as a major in 2002. Funeral escorts also were free through the 1970s. Other personal touches from Sheriff Thompson and later Sheriff Frank Wanicka included buying turkeys out of pocket at Christmas to feed the inmates and employees a holiday meal.

Sheriff Thompson, a popular Democrat, tussled and won a gambling-related spat with Republican Gov. Claude Kirk in July 1967. The governor suspended Sheriff Thompson after accusing him of knowing about illegal gambling in the county and failing to act on it. Only 12 days later, the Florida Senate voted unanimously to reinstate the Sheriff. “He was a Republican governor and I was a Democratic Sheriff. He was trying to make a name for himself,” Thompson said in a 1993 Fort Myers News-Press profile of the Sheriff. “The charges were unfounded and the Senate agreed.”