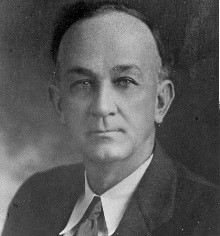 Sheriff Frank B. Tippins held the top law enforcement post for another two terms beginning in 1925 and became Lee County’s longest serving Sheriff. In fact, he had the longest law enforcement career in Florida – and possibly the nation – with 53 years of service at the time of his retirement, according to The Associated Press, after serving as a Miami-based United States Marshal until 1946.

When making an arrest, Sheriff Tippins would customarily go to the home of the offender and discuss the matter and warn of the arrest warrant as a means to avoid violence when taking a person to jail, his obituary recalls. He avoided the practice of locking up drunks unless they became unruly, and maintained his reputation for honesty. He was proud there never was a lynching during his tenure, and that he was able to prevent such an act from happening through his persuasive abilities and protection.

Sheriff Tippins and his Deputies in 1927 successfully faced down a mob of approximately 100 men, many of whom were heavily armed, who threatened to storm the jail in search of a black man accused of attacking a white woman. Sheriff Tippins ordered the men to disperse and ordered his Deputies to shoot to kill should anyone force his way onto the jail grounds. The order had its intended effect, according to national press reports.

Sheriff Tippins captured an estimated 450 illegal aliens during his Sheriff’s Department tenure. Press reports state that so effective were his operations the Sheriff would be waiting on the beach for the foreigner to emerge from the water.

During this time, Henry Ford’s Model T automobile transformed the country from isolated communities to a mobile society and helped create “middle class” America. Construction of the Tamiami Trail began in 1915 and didn’t end until 13 years later in 1928. It cost $8 million and required 2.6 million sticks of dynamite in its construction. Considered a feat of engineering, it was the only route from Tampa to Miami until 1968 when Alligator Alley was built. Automobiles made travel easier for people, and as cars became less expensive and people had more leisure time, they chose Florida as a vacation destination.