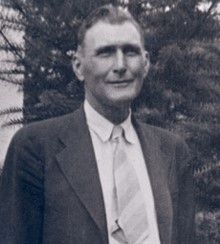 Gov. Cary A. Hardee appointed J. Ed Albritton interim Sheriff in April 1923 following Sheriff Frank B. Tippins’ second resignation, but unlike his predecessor Sheriff Hand, Sheriff Albritton refused to give up his seat when Tippins returned to reclaim it. That prompted a contested election that Tippins won. With 22 month’s tenure, Sheriff Albritton has the second shortest tenure of any Lee County Sheriff.

Within one day of his appointment, Sheriff Albritton appointed Edgar Tippins, a distant relative of his predecessor, as Chief Deputy, while responsibility for supervision of office work fell to Cynthia Kinney, the sister of Sheriff Albritton.

Also during this time, the Florida Legislature created Hendry and Collier counties from the southern and eastern sections of Lee County, significantly reducing the county’s square miles from 4,298 to 804. The more than 80 percent decrease undoubtedly lowered demands on law enforcement. A news report shows that gambling and intoxication were the leading causes of arrest in 1924, with 12 of the 36 arrests in February coming from those two offenses.

The extension of the Tamiami Trail from Punta Gorda to Fort Myers completed the vital link in the west coastline route. Once the wooden bridge, which extended north from Fremont Street and across the Caloosahatchee River, was completed in the winter of 1924, Fort Myers became open to the world via the “Trail.” Until that link was made, Fort Myers had lagged behind other cities in the Big Florida Boom. Coupled with the extension of the Dixie Highway from Olga to Arcadia, Lee County and Fort Myers began going real-estate crazy with the rest of the state, caught up in the lure of quick and easy profits.