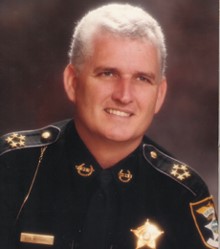 Personal convictions were the hallmark of Sheriff John McDougall’s three terms as Sheriff. The former seminary student turned top law enforcement officer brought passion to his position, fighting valiantly for what he thought was right.

After attending the FBI Academy in spring 1990, Sheriff McDougall returned to Lee County committed to training and education. During this time, agency members participated in and hosted regional, state and national law enforcement summits. Members brought back innovative ideas that raised the collective consciousness of where the agency was and where it wanted to be, then-Chief Deputy Duffala recalls. The agency earned national law enforcement accreditation by 1991, which it still holds, and added a full-time in-house training center and educational incentives for advanced training. Greater emphasis was placed on criminal justice planning and operational techniques.

Sheriff McDougall, along with key leaders of the 20th Judicial Circuit and other local law enforcement agencies, recognized a dramatic increase in violent juvenile crime in Lee County in the early 1990s. In response to this public safety concern, during a seven-year period, Sheriff McDougall provided the leadership Lee County needed to develop, construct and implement a Juvenile Assessment Center that operates as a central point of delivery, intake and screening of arrested juveniles. The Sheriff also started the Do The Right Thing program, in which teachers and parents could nominate students who demonstrated exemplary behavior and were rewarded for making good decisions.

The new administration continued to modernize the agency. The aging Nixdorf computer systems were upgraded to a Windows-based platform, and a huge communications advancement surfaced known as “emails.” In 1999, all certified officers and select others were issued telephone-activated pagers, while Command Staff used cumbersome, first-generation cell phones. The Communications Division adopted the 800 MHz radios, upgrading the range and reliability from old VHF radios.

Lee County was not immune to big-city crime and found itself caught up in the international uproar over tourist killings. At its height, 10 foreigners were killed in a 13-month period between 1992 and 1993 in Florida, according to press reports. This included the death of a German tourist shot while walking with his fiancé in Fort Myers. An additional German tourist was found shot to death and dumped in Lehigh Acres in 1996.

The 1990 bombing of the Fort Myers Drug Enforcement Administration building by Fort Myers Beach drug kingpin Jeffrey Matthews prompted a nationwide manhunt until he was captured nearly a month later. Matthews, 23, avoided a possible death sentence through a plea bargain that included his admission of the killing of a federal witness and operating a cocaine smuggling ring. At the time, Fort Myers Beach Chamber of Commerce president D.J. Petruccelli called the Beach’s drug problem a perfect 10 on a scale of 1 to 10. Sheriff McDougall increased the number of Beach Deputies from two to eight and took a zero tolerance approach to drug dealers to rid them from the area – through deterrence or jail sentences.
The Florida Supreme Court’s 1996 decision to restore “gain time” for good behavior to violent felons and rapists resulted in the release of about 500 murderers, sex offenders and other violent criminals in one of the biggest mass releases in Florida history. This didn’t sit well with Sheriff McDougall and Attorney General Bob Butterworth, who unsuccessfully tried to get the U.S. Supreme Court to hear an appeal of a ruling that triggered the early release of inmates described by one prison official as the “worst of the worst.”

Sheriff McDougall’s concerns landed him on NBC’s “Today” show in March 1997 where he warned a national audience to stay away from Florida, much to the chagrin of the state tourism industry and Gov. Lawton Chiles. “I wouldn’t tell anyone, wouldn’t even tell my family to come. I think it’s very dangerous.” Despite the tourist killings and prisoner releases, Lee County’s tourism industry held steady and rose from 1.5 million visitors in 1992 to 1.9 million in 2000.

Personal convictions repeatedly came to the forefront repeatedly. Sheriff McDougall attracted national attention in 1992 for wanting to have rapper Ice-T charged under Florida’s hate crimes law for his song, “Cop Killer.” His 1997 sharp rebuke of an abortion provider requesting protection from protesters reverberated nationally and made the pages of The New York Times. At the 1999 Edison Festival of Light, Sheriff McDougall displayed an anti-abortion sign from his vehicle in the parade and drew the ire of event officials and some members of the public.

Behind the public persona, however, was a leader dedicated to upholding the law, according to Bob Macomber, a major over Criminal Investigations during this time. “Personal opinions of the Sheriff never interfered with the execution of the law,” he says. That included providing area checks at the office and the home of a local abortion doctor enmeshed in the Sheriff’s campaign against abortion.

Internally, the Sheriff’s Office faced repeated fights with the county over budget proposals. “We continually stood our ground and appealed budget cuts imposed by the Board of County Commissioners to the Governor and Cabinet,” Sheriff McDougall recalls. “Because of our constitutional mandate concerning law enforcement, courts and corrections, as well as our detailed budget justification and presentations, we won every appeal.”

Reflecting back on his time in office, Sheriff McDougall says his administration made many difficult decisions without the benefit of hindsight. “I too am a human being, and if during my tenure in office I unconsciously offended anyone, then I sincerely apologize to them for that transgression.” His advice: “Do the best you can do to help people and to actually and humbly ask Almighty God to give us the virtue of wisdom.”