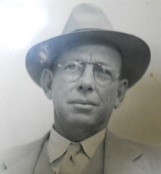 When President Franklin Roosevelt declared war on the Japanese on Dec. 8, 1941, Sheriff Fred Roberts helped lead the charge to defend Southwest Florida and contribute to the war effort.

Residents formed the Fort Myers Defense Council, which included Sheriff Roberts, and immediately hired armed guards to watch over the city gas and water plant. A month later the Council began enforcing vagrancy laws that would require all unemployed men to work in the fields, according to the 1989 article “Fort Myers During World War II” published in the Spring/Summer edition of Tampa Bay History. In response to a federal call for more food and a lack of farm workers, Lee County farmers increased the production of potatoes, hired more hands and did their share to “help win the war.”

Controversy arose in March 1942 with Sheriff Roberts’ call for anyone with a high-powered rifle to register with him as part of civilian defense measures. Sheriffs were responsible for the defense in the absence of military forces, but the decision was opposed by the State Defense Council as too dangerous.

The most important wartime change in Lee County was the creation of the Buckingham Gunner School Airbase and Page Field Airbase. As thousands of airmen were processed through the two facilities, policing became a challenge. Lee County’s population had grown to 17,488, according to the 1940 Census. Still that population was nearly exceeded by the influx of 16,000 servicemen, according to “The Story of Fort Myers” by Karl H. Grismer.

Buckingham had its own federally administered civilian police department, according to Jimmy Flynn, who ran the jail at the air base for 3½ years until it closed in 1945. He says the soldiers there went wild when off duty, leaving Sheriff Roberts greatly outnumbered with only two Deputies to assist him.