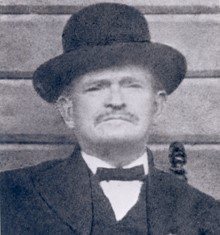 Gov. Edward Perry appointed Thomas W. Langford Lee County’s first Sheriff in 1887 and made him responsible for public safety throughout the nearly 4,000 square miles of Southwest Florida. The area was sparsely populated, with only 1,414 residents, according to the 1890 Census. The original “Lee County” included the areas now known as Lee, Hendry and Collier counties. Before Lee County was created on May 13, 1887, Fort Myers was part of Monroe County. Residents were required to travel by boat to the county seat in Key West to conduct business. Monroe County officials were unwilling to build decent roads and bridges along the Caloosahatchee. This isolation upset local pioneer families. Creation of the new county did not automatically translate into improved conditions, according to “Florida Sheriffs: A History 1821-1945.” Frontier violence remained far too common in an era of cattle culture and frontier individualism. Transportation was crucial to early settlers and limited primarily to rail, steamboat and schooners. Henry B. Plant’s decision to build a terminal for the South Florida Railroad in Punta Gorda instead of Fort Myers when he extended the railroad south from Tampa kept Fort Myers and the Caloosahatchee from having direct access to northern markets for its produce and thus slowed growth of the area. Trains didn’t run to Fort Myers until 1904. There was a jail in Fort Myers that was part of the Monroe County government. When Lee County Commissioners took office, they found the jail unsafe and too expensive to continue to operate. In July 1889, commissioners asked Sheriff Langford to move the prisoners to the Key West Jail until a new jail could be built. Commissioners paid the Pauly Jail Building Company of St. Louis, Mo., $7,284.30 to construct the first Lee County jail, which opened in June 1892 and remained in service until 1953. Commissioners later granted Sheriff Langford’s request to build an office in the new jail, with construction costs not to exceed $10.00. Homesteading was a primary draw to the region, as was farming. The winter of 1894-95 was known as “The Big Freeze.” Twin blasts of frigid air descended in December 1894 and February 1895, severely damaging orange groves in the state and driving investors and settlers farther south to develop lands more protected from the elements. The Caloosahatchee River valley grew, while Pineland became a citrus center for several settlers. Sheriff Langford, who was Marshal of the Fort Myers Police Department at the time of his appointment, served his first full term after winning election in 1888, followed by two additional terms before deciding not to run again. These were rough times, with frequent shootings and stabbings, and Sheriff Langford had his hands full. In his first month in office, Sheriff Langford arrested two young men responsible for a shooting spree that started with an attack on a black church, followed by another attack on a black family that wounded a mother and her son. Reports noted residents responded to the arrest with their “strongest approval,” while the prosecution used the case as an example to show that lawlessness would not be tolerated and that laws would be enforced.